#22
Do you remember when you did yours did you have to take significantly more metal off the side closest to the exhaust valve than the other to blend the bowl up to the throat?

Supporting Member 2
#23
I didn’t do anything too crazy with mine. Just cleaned everything up, softened the short side radius bullet shaped the guide bosses and gasket matched to intake and exhaust
4

#24
When you gasket matched did you open up the pushrod pinch any?
4

#25
Well gasket match didn't make the intake opening much larger but did make shape more consistent,exhaust opening a little larger but not a lot,what was surprising was how much the pushrod pinch can be opened and still have lots of wall thickness,it was surprising how much it intruded into the port.

Supporting Member 3
#26
427John said:
Well gasket match didn't make the intake opening much larger but did make shape more consistent,exhaust opening a little larger but not a lot,what was surprising was how much the pushrod pinch can be opened and still have lots of wall thickness,it was surprising how much it intruded into the port.
Click to expand...
Sounds like someone's getting busy .........

#27
Hey Yellow Wagon did you ever post the photos of the 333 heads you ported? I can’t find them if you did. I’m in the process of doing mine and could sure use them. Thanks for the information and knowledge.

Supporting Member 3
#28
Aducati4me said:
Hey Yellow Wagon did you ever post the photos of the 333 heads you ported? I can’t find them if you did. I’m in the process of doing mine and could sure use them. Thanks for the information and knowledge.
Click to expand...
Pm him......... 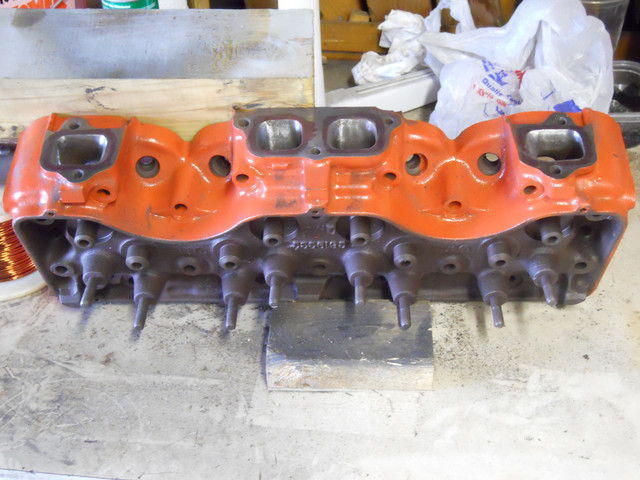 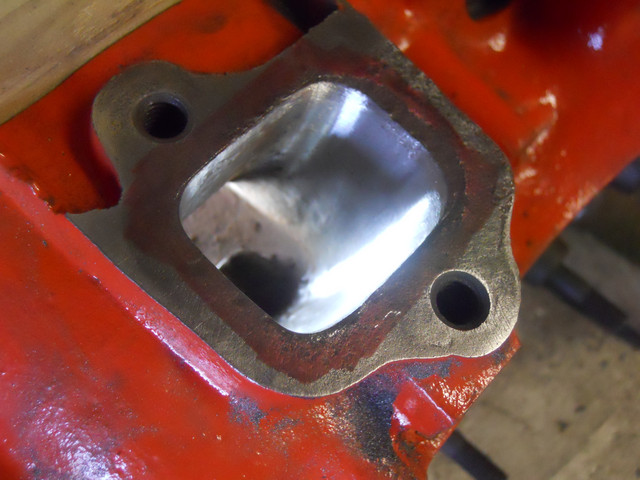 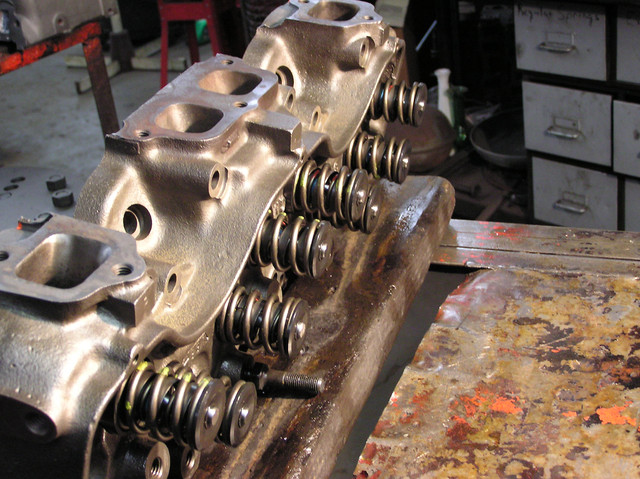 Supporting Member 2
#32
I did the head porting on my motor myself with some consultation with the late Ronnie Russell. I used a straight grinder with an old burr (somewhat dull) so not to remove too much metal too quickly, a Dremel with a cylinder stone and some sanding cartridge rolls ala Harbor Freight to finish the grinding. In a nutshell, I gasket matched the ports to the intake and exhaust gaskets, removed casting flash/mess, smoothed everything, bullet-shaped the intake guide bosses, rounded and removed some metal on the exhaust bosses and just basically cleaned things up. Nothing crazy.

The photos above show the basic finish and what I did. Hope this helps

That is long, boring, tedious work.

The results, speak for themselves.

Supporting Member 2
#34
It does take a long time especially when you are scared to remove too much too fast haha. But I’m cheap and figured if I wrecked a head, it’s a 333 casting and replacements are on the shelf in the garage. So no biggie. Plus it’s fun when people ask who ported the heads and I can say I did. Tony Shaffer was really impressed with how well the 333 castings breath with larger valves and the port work. My motor made HP all the way up to 6k rpm. I did gasket match the Edelbrock dual 4 intake as well and smoothed the runners a bit so there was a seamless transition from intake to head.

But yea it’s not “hard” to do but just takes some time and quite a few beers in the garage to get them done.
D

Supporting Member 3
#35
Jason,did you take any pictures of the intake side as well? Another little known fact,based on the spec's that you posted on the build is that your heads have bigger intake valves,but the exhaust valve sizes remain stock at 1.67.

Supporting Member 2
#36
I don’t have any finished photos of the intake side, I looked. I took some in progress but nothing once I was all done unfortunately. Sorry

I am fortunate to have a set of 333s that I cleaned up years ago, had screw in studs prepped, then shipped them to Ronnie to "do his thing". This was around the time Jason put his 409 together. Unfortunately they have been sitting on the shelf since then, as most of my more recent builds have been based on the 690s and 583s. I remember Ronnie said he had about 30+ hours into the port work. He also mentioned how many carbide tips he went through in the process

The only potential build I have for them is one of those "double notchers", a 348 truck block that has .040" cast pistons of unknown origin

Supporting Member 3
#38
I have a suggestion as to what you can do with them,sent you a pm.

Supporting Member 5
#39
While I can appreciate Jason and Ronnie's efforts on those 333s, I don't get too excited about the mini-chamber and the rotator eliminator requirement. Then you get to do the machine work for larger valves, guides, surfacing, thread repair, etc. And the weight as well?

In the past, I've done several sets of iron heads just because I could. I know just enough to be dangerous, and I have seen a lot of "good" ports. But at my age I don't have the patience or the time to inhale cast iron for hours on end. That stuff goes everywhere! Maybe that last set of 379s cured me or maybe I've gotten lazy. I just know, especially on SBCs, the aftermarket options are so cheap that it's a no-brainer. Not quite the case on W motors, but I think I'd still do the math first. Just an opinion, doesn't mean anything!

Supporting Member 2
#40
I don’t know. I think the truck heads would still be cheaper and a head for a mild engine if you don’t mind getting dirty. I wouldn’t bolt on edelbrock without having the valve job and guides done anyway so no savings there.
You must log in or register to reply here.
Share: Email Link
Top